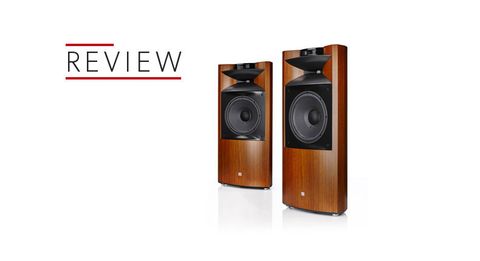 JBL’s K2 S9900s are a fantastic pair of speakers that deliver a spellbinding combination of dynamics, insight and finesse. Retro appearance may not suit all, though

Even putting the massive price tag to one side, many won’t get on with their determinedly retro appearance, their unfashionable proportions (which make them wider than they are deep) or even like the fact they use horn technology for everything above bass frequencies.

But we think these people will be missing out. The K2s are superstars, delivering performance as informative as it is fun. We can’t think of an alternative that has had such an addictive effect on us.

What makes them so good? As usual, it’s never just one thing - it's a combination of engineering and tuning decisions that have turned these monsters into one of the finest pair of floorstanders we’ve ever heard.

Monsters? First off, these speakers are huge. They’re about the size of a stout fridge, and weigh much the same.

To put numbers on it, these are 120cm high, about half as wide - and they weigh in at a hefty 83kg each. Don’t try to install these JBLs alone; your back won’t thank you for it.

Other numbers say a lot about these floorstanders – 38cm bass driver, 93dB/W/m sensitivity and 8 ohm nominal impedance with a minimum just one shy of that. From these figures you can expect plenty of bass action, with no shortage of sonic authority and the ability to deliver high volume levels from modestly powered amplification.

While these speakers sound perfectly happy with a good quality 50W amplifier, their power handling figure of 500W suggests they may come into their own when driven by high quality, high power amplification.

Indeed, much of the design work on these was done with sister brand Mark Levinson’s products – and those never want for grunt.

The S9900s are three-way speakers. That large rear-ported paper-coned bass driver works all the way to 900Hz, at which point a 10cm magnesium compression driver takes over.

This unit is far more than just a midrange driver, as it handles most of the treble too - right up to 15kHz ,where the 25mm beryllium compression supertweeter takes over.

The integration between these drivers is handled seamlessly through a high quality, but relatively simple, biwire crossover. The aim with this circuit is to maximise detail and dynamics, while still providing a convincing and relatively even frequency response.

While horn speakers don’t have a particular stellar reputation as regards a smooth frequency response, these JBLs prove things don’t have to be that way.

The engineers have taken great care with the horn profiles to ensure good and balanced dispersion.

That curved front baffle provides the sidewalls for the main horn, while the top and bottom sections are made of precision-moulded Sonoglass. The supertweeter is also horn-loaded - in this case it sits behind a dedicated Sonoglass horn.

Two MDF layers of differing thickness go into making the 25mm thick cabinet. These layers are decoupled from each other but, together with extensive bracing, make the K2’s cabinet a surprisingly rigid and inert structure.

Fit and finish is as good as we demand at this level. Each cabinet edge is beautifully crisp and the finish of the wood veneer on our samples is flawless, just as it should be. There are two standard finishes – the wood grain of our review sample, or Zebrawood.

Add another £11,000 to the K2’s price and you can have a choice of seven high-gloss options. These are built to order – taking around four months to complete – and hand-worked to a mirror finish.

Positioning is remarkably easy. These may be massive speakers but they don’t need a particularly large room in which to shine.

Our 7 x 5m listening-room is perfectly acceptable, even though we have no doubt a larger space will result in an even bigger sense of sonic scale, even more agile low frequencies and the opportunity to push the speakers harder.

We position them about a metre from the back wall and well away from the sides, with just a bit of angle towards the main listening position.

It’s worth playing around with the angles, as it’s possible to dial in the stereo image scale pretty well. Even once you’ve got things optimised, if you sit notably off-axis the soundstage isn’t so convincing, though the JBL’s sonic character remains intact.

It also pays to take care with partnering equipment. While the K2s are surprisingly easy to drive, they’re also wholly transparent to the quality of the source and amplification, right down to the cables used. If your equipment has flaws or simply a distinctive sonic characteristic, these speakers will reveal it.

In a nutshell: don’t skimp on the system. If you’re planning on buying speakers at this level, expect to pay a similar price for the rest of your set-up.

It’s hard not to approach speakers like these JBLs with preconceptions. They’re huge, and have a massive bass drivers - so high volume levels and seismic bass must be firmly on the menu.

Horn design? That must mean high sensitivity and punchy presentation, plus a bit of shoutiness thrown in. Right?

Well, yes and no.

Most of these things ring true. We start off with one of our favourite bass torture tracks, the classic Angel by Massive Attack. After a few seconds we sit back and laugh at the ease with which the K2s manage to deal with that distinctive, insistent bassline.

Low frequencies are rendered with utter conviction. Yes, they are extended and powerful but, less predictably, they bristle with agility and texture.

We can’t recall hearing this track laid bare with such skill or reproduced with such composure, especially at high listening levels. This is a sound you feel as much as hear.

Most speakers change their sonic character noticeably as volume levels change, but not these. The K2s retain most of their sparkle even at a whisper, and from there continue with an unchanging balance as the watts mount.

They stay clean and controlled while refusing to harden up, even at very high levels. Trying to break them, we find our limits are breached first.

But the K2s are more than just about bass and volume. Move higher up the frequency range and you’ll find an immensely engaging midrange that captures vocals with considerable skill. Voices are strongly projected with a great deal of clarity.

That nominal midrange driver covers everything from 900Hz right through to 15kHz, so there’s none of the vagueness we hear from conventional speakers (whose crossover point tends to be planted in the heart of the midrange).

Crossover networks, while necessary in speakers, invariably add a degree of phase distortion while compromising transparency and dynamics. The K2 has moved these unavoidable issues to frequency points where they’re much less likely to be heard.

Moving on to Hans Zimmer’s Interstellar OST and it plays to the K2’s strengths. It’s a chance for the speakers to show off their immense authority, their ability to deliver large dynamic shifts and display their skill at organising a complex production without pulling the music apart.

The K2s sound clean and clear, handling the most fragile instrumental strands with all the care they deserve. Yet they’re fully capable of generous portions of scale and power when the music demands. Just a short listen to Mountains is enough to convince us of that.

Flaws? We’ve heard speakers that convey the tonality of an instrument more convincingly, though few - if any - that manage to deliver the dynamic nuances of that instrument better or match the palpable sense of presence.

While these JBLs paint a fairly convincing soundstage, it’s not as expansive or as out-of-the-box as some we’ve heard.

In our experience, even the very best hi-fi can remain some way from perfection. But make no mistake, we consider the K2 S9900 to be among the best speakers money can buy.

They can charm and thrill. They can make us sad or happy, just as the music demands. We can’t get enough of them.