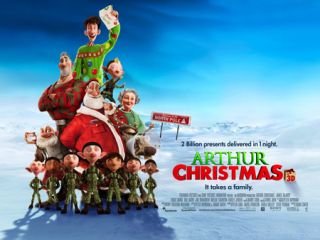 Welcome to The Week in HD - our guide to all the best high-definition TV shows, films, Blu-rays and sports to grace your screen each week.

How does Santa deliver all those Christmas presents to every single child in one night? Magic? Nope. A combination of high-tech gadgets and military precision, all fronted by Santa's son Steve.

But when one little girl doesn't get her present, Santa's youngest son Arthur and Grand-Santa team up to deliver the forgotten present before Christmas morning comes up. Aardman Animation serves up some dazzling animation, with the voice talents of James McAvoy, Hugh Laurie, Jim Broadbent and Bill Nighy.

It's the third round with 10 more chefs hoping to impress by cooking up a storm with seven key ingredients.

Skills test with the ever fearsome Monica Galetti, this time the challenge is to prepare three classic sauces - hollandaise, maltaise, mousseline - served with asparagus, all within 15 minutes.

Ridley Scott's wartime adaptation of the book detailing the events of 1993, when a group of US Rangers were dropped into Somalia, leading to a brutal clash with the destruction of two Black Hawk helicopters. Starring Ewan McGregor, Josh Hartnett, Orlando Bloom and Eric Bana.

There's just five days left to watch this documentary by filmmaker Jeanie Finlay, depicting one of the very last independent record shops still going strong. With the startling statistic that an independent record shop has closed every three days in the UK over the past five years, it's a heartwarming documentary about the daily life in a Teesside vinyl record shop, and how a small community is keeping it alive against all odds.

Beef kidney and fish stew. Things my mother tried (unsuccessfully) to make me eat as a child, and yet I suspect I'd gobble them up without a word of protest if Monica was looming over me like that.

From the writer of Leon and The Fifth Element, Luc Besson delivers non-stop high-octane action, propelling Jason Statham into stardom as a mercenary who transports goods without asking questions. Of course, curiosity gets the better of him and breaking his own strict rules leads to a lot of unsavoury people trying to kill him.

I really need to catch up with what's happing on The Hour, because I just noticed that Randall, the new head, is played by none other that Peter Capaldi! Bel really needs a holiday at some point, a break from dealing with both Hector (drunken dalliances and missing work) and Freddie (who's conducting a controversial interview in front of the BBC board).

Were the Olympics only just this summer? This documentary follows one of the sporting heroes of the year, star cyclist Bradley Wiggins who became the first Briton to win the Tour de France, along with storming to gold at the London 2012 Olympic Games.

Chef's choice for critics. The five remaining chefs that survived the heats this week are now free to cook up the dish that best describes their style of cooking to impress three hard-to-please food critics.

Qualifying. Live coverage of the qualifying sessions from the Interlagos circuit, the last of the 2012 season.

Or, The One Where Derren Brown Kills Stephen Fry.