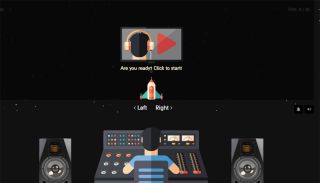 Ear Training is something we at What Hi-Fi? are more than happy to get behind, and not only because it can be done from the seated position.

Few online resources are as evangelical about Ear Training as SoundGym, and the site has a number of Ear Workout Routines available. Its latest, though, may be its greatest - and there's even a competition attached.

The Panning Challenge invites you to play an old-school Space Invaders-style arcade game - but here the aliens are invisible and can be located only by the sound they make. Your objective is to locate them in the stereo soundfield and shoot them before they hit they ground.

If you can shoot more than 25 aliens in the alloted time, SoundGym will put your name in the draw to win a pair of ADAM A5X Studio Monitors. The competition runs until September 28th - fingers crossed the game stays up after that, because it's a splendid (and occasionally infuriating) test of one's powers of stereo perception.

Modesty prevents me from disclosing just how many aliens I've been able to shoot during the alloted time. But I have made some space for my nice new studio monitors.