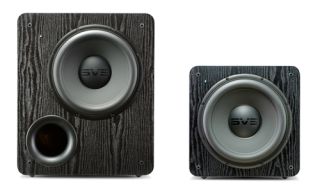 SVS has announced the UK debut of its latest active subwoofers – the sealed SB-2000 and the ported PB-2000, both of which feature the 'Ultra' acoustic design of the firm's flagship models.

The new units – priced at £649 and £739 respectively – both incorporate the new 500W Sledge DSP amplifier that drives the "completely redesigned" 12in SVS driver.

SVS believes the sealed SB-2000 and ported PB-2000 (above) subs will "challenge the best sub £1000 models" and the manufacturer is confident the designs will "attract new fans to the brand".

The SVS drivers promise improved durability and reliability in an effort to ensure the units "play their best long into the future".

The SB-2000 (above) achieves a frequency response of 19-240Hz and has flexible connectivity options, including stereo line-level RCA input and outputs. It weighs in at around 16kg.

In comparison, the PB-2000 weighs nearly 30kg and features a front-firing 4in high-flow port. It also provides a "more physical" bass output by offering a frequency response starting at 17Hz.