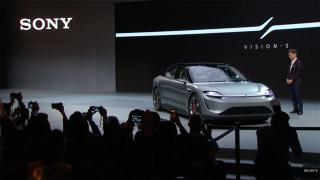 Well, we weren't expecting that. Sony has caused something of a stir at CES 2020 by unveiling its own electric concept car. Dubbed Sony Vision-S, it features Sony's vision for the future of in-car entertainment and includes some major enhancements in the way we consume content on four wheels.

Sony pointed to its 360 Reality Audio sound format as being the perfect medium for listening to audio in its Vision-S concept, allowing passengers to be completely immersed in music. To enhance this feeling, Sony's concept car has multiple speakers built into each seat.

Vision-S also brings with it a look at the way users interact with in-car systems and includes a huge panoramic touchscreen interface for the driver and passengers to navigate with.

The future of in-car entertainment has been one of the big talking points of CES 2020 so far, with the Sony news following on from an earlier announcement that Sennheiser and Continental have joined forces to create a speakerless in-car audio system.

We'll be attempting to take a closer look at this cool-looking concept and hopefully listen to its 360 Reality Audio system in action over the coming days.

Sony reveals the official PS5 logo (and it's familiar)