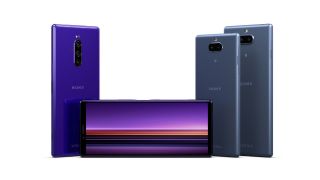 With phrases like 'Dolby Atmos', '4K HDR OLED' and 'Cinewide display' bandied around at Sony's Moblle World Congress press conference this morning, you could well think you were watching a TV launch.

That goes to show how ruthlessly cinematic Sony's new flagship smartphone is trying to be.

Successor to the Xperia XZ3, the all-new Xperia 1 sports a generous 6.5in 4K HDR OLED screen (a world's first allegedly) with a CineWide 21:9 aspect ratio - an ultra-wide ratio that a lot of movies are shot in. You can, therefore, watch compatible movies on Netflix in 21:9.

Sony enthused over the wide-screen format also benefitting split-screen multi-tasking and shooting, too. On the latter, the triple-lens 12mp camera – comprised of a 16mm wide-angle lens, a 26mm lens and a 52mm telephoto lens – can shoot 4K HDR at 24 frames per second.

A new algorithm works to ensure video stay sharply focused exactly to the level of eyes, while burst shooting features up to 10 fps Auto Focus and Auto Exposure tracking.

Dolby Atmos is onboard, and the audio tuning has been developed in collaboration with Sony Pictures Entertainment in an effort to get as close as possible to what the creator's intended.

Like many of the flagship phones this year, the Xperia 1 runs Qualcomm's Snapdragon 855 mobile platform and ships with Android 9 Pie.

There's a 3330mAh battery, 6GB of RAM, and 128GB storage that can be expanded by 512GB via a microSD card. The Xperia 1 is water resistant, too, and has a side-mounted fingerprint scanner (instead of a more preferable screen-based one).

The Xperia 1 will be available in black, purple, grey and white in select markets from late spring.