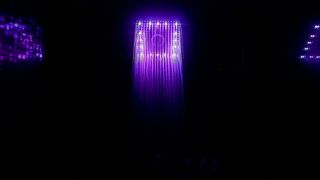 If there had been a gap in the market for a lightbulb combined with a Bluetooth speaker, it now looks as if it's been filled. But a shower head that streams not only water, but your music collection as well? Let us explain some more...

A New Jersey-based team headed by entrepreneur Anthony Rumeo has taken to Indiegogo in order to raise $50,000 (£30,000) for the Shower Speaker – a "shower system with studio quality sound and LED light sensors".

The campaign runs until 9th September, with the funding – if successful – being used to produce the new speaker. It covers "tooling expenses, injection mould forms and to hit minimum production order numbers with our supply chain".

Housed within a stainless steel rainfall shower head, the chargeable wireless Bluetooth speaker will deliver up to 15 hours of music or talk through 3-watt waterproof speakers. Using Bluetooth 3.0, it has a range of 40ft.

In addition, the Shower Speaker team says the new product – expected to retail at $140 (£83) – will include "pickup technology for background noise cancellation, while LED lights will react to the changing water temperature".