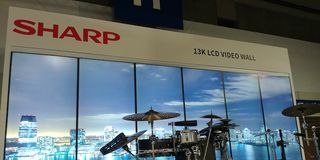 While 8K may have made waves at CES 2018 thanks to LG, Samsung and Sony showing off 8K TV prototypes, Sharp has plenty of history when it comes to showcasing 8K technology.

So it was no great surprise to hear about the huge 8K Sharp LCD TV that’s set to go on sale later this year. But the company, which is owned by Taiwanese electronics giant Foxconn, has its eyes on OLED, too.

Universal Display, a developer and supplier of OLED technologies, has announced an extension of its partnership with Sharp Corporation to provide, "OLED materials and technology to Sharp Corporation for use in the Company’s OLED displays".

So Sharp OLED displays can't be far away - and will represent welcome competition for LG Display, which currently has something of a monopoly when it comes to suppling OLED panels.

MORE: What is OLED? The tech, the benefits, the best OLED TVs and phones

Sharp OLED screens have been long rumoured. Last summer, Japan Times reported that Sharp would invest 57.4 billion yen (roughly £370m) to build new OLED production lines at one of its plants. These were “expected to go into operation in April-June” 2018.

And towards the end of last year, Sharp’s president, Tai Jeng-wu, called for a “Japan Alliance” - a joint operation with Japan Display, who have also announced plans to start OLED panel production. JOLED ­– an affiliate of Japan Display and created in 2015 by merging the OLED divisions of Sony and Panasonic - has already begun selling OLED panels, including some for Asus monitors and, reportedly, Sony medical monitors.

LG’s reported $13.5 billion investment over the next three years to build on its already well-established OLED production (in both TVs and, unfortunately for rival Samsung, smartphones) should keep the Korean giant at the top of the OLED output table.

But opening up a market that now, and for a long time, has been single-handedly carried by LG when it comes to TVs, can only be a good thing. We wait with bated breath.