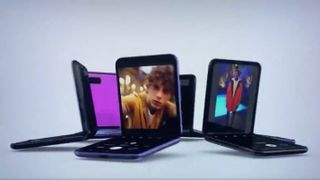 Samsung really is its own worst enemy. Not only has a pair of Galaxy Buds Plus wireless earbuds shipped before their official announcement, it's just dropped a major spoiler about the design of its upcoming Galaxy Z Flip.

The reveal came courtesy of a TV advert during last night's Oscars. This was spotted by The Verge's Nilay Patel, among others.

The 28-second ad shows the foldable phone from pretty much every angle, as it spins around, flips open and generally does its thing. And it looks like that early hands-on was correct - it's a clamshell phone with a tiny second screen on the outside that shows incoming calls.

The device spends most of the ad sitting up on a flat surface, so maybe Samsung is selling it as a great phone for video calls. It looks like it's not completely flat when folded open, though.

As Patel points out, a disclaimer in the ad says that the crease in the centre of the display is "a natural characteristic of the screen". So like the Galaxy Fold before it, you will see a seam.

The Galaxy Z Fold is expected to be made official at tomorrow's Samsung Unpacked event in San Francisco. We're also expecting the Galaxy S20 and Galaxy Buds+ earbuds, both of which have also been leaked.

This begs the question does Samsung actually have any surprises left? Come back to What Hi-Fi? tomorrow to find out.

How to watch Samsung Unpacked 2020 live: see the Galaxy S20 unveiling as it happens