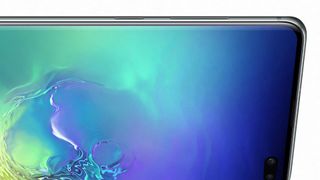 The Samsung Galaxy S20 (aka the S11) is just under a month away from officially launching, but now we have more of an idea of what to expect.

A major leak from XDA-Developers has detailed numerous specs, including that much talked-about camera.

The images purport to show the Galaxy S20+ 5G; traditionally the 'plus' variant is bigger and more powerful than the standard S model. The boot screen shows the handset's name, which gives the leak credibility.

So what do the pics tell us about the S20? As you can see from the image above, there's an elaborate rear camera set-up that reportedly includes a 12-megapixel main camera, as well as an ultrawide, telephoto and possibly a macro lens.

The front shooter is also housed in a pinhole cutout at the top of the screen.

According to rumours, the S20+ won't be the highest-specced in the range. Those honours will reportedly fall to the S20 Ultra, which could boast Samsung's frankly insane 108-megapixel camera sensor.

If this talk does square up, Samsung could launch numerous iterations of the S20. As well as 5G versions of the standard S20, S20+ and S20 Ultra, there's also the more low-end S20e to consider. Add in LTE variants of all of these, and you've got a possible eight-strong S20 family. And that's before you start thinking about different models with different inbuilt storage options.

The S20 is the successor to the Galaxy S10, but it's thought Samsung will call it the S20 because of its launch year of 2020. (It would also put some ground between it and the iPhone 12 when it launches this year.)

The S20 will launch at Samsung Unpacked on 11th February in San Francisco. Samsung has also hinted that it'll launch its second foldable phone at the same event.

• Best smartphones for movies and music