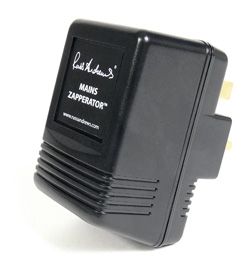 New from Russ Andrews are the Mains Zapperator and Mini Zaps, both designed to absorb and dissipate RF (radio frequency) and EMI (electro magnetic interference) spikes on or induced by the mains power supply, often caused by mobile phone and wireless networks.

"Working at RF and super high frequencies, the Zapperator has the effect of reducing the impact of these spikes on the audio bandwidth without affecting the audio frequencies themselves," claims Russ Andrews.

For installations where wirelesss networks or ethernet-over-mains Homeplugs are used, the Mains Zapperator plugs straight into a standard wall socket near the hi-fi or AV system to create a 'quiet zone', or near the source of the noise such as the wireless router.

The Mini Zaps come in two guises. The first is micro-sized and fits directly into Kimber analogue interconnects for use with line and phono level signals.

The second is available built into blanking plugs – in phono, DIN or XLR format – that plug directly into unused sockets on the amplifier or source components.

Managing director Russ Andrews says: "I was shocked by the level of deterioration in sound quality whenever I had my computer switched on near the hi-fi system. This led me to investigate the effects of RF and EMI on audio signals and working with Ben Duncan and Paul Houlden, we developed the idea for the Zapperator to help combat this degradation."