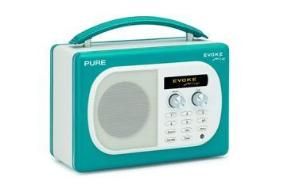 Pure's Evoke Mio has just been released in a range of five new spring/summer colours – teal, laval, grape, cherry and noir – with a two-tone leather-effect finish and matching cream fascia.

If that all sounds a bit Elle Decoration, remember the Evoke Mio is a fine-sounding DAB/FM radio with an input for an iPod/MP3 player.

Other features include an OLED display, textSCAN and Intellitext for pausing and controlling scrolling text, an alarm, kitchen timer and 30 presets.

If you want to use it outdoors, the optional E1 ChargePak (£35) gives up to 24 hours of portable listening between charges.

The new Evoke Mio colour range will be available from March for £130.