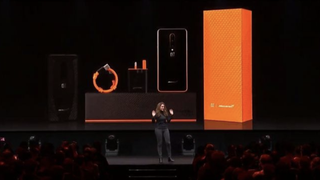 Just a fortnight after revealing its third handset of the year, the 7T, OnePlus has this evening announced another two handsets, the 7T Pro and 7T McLaren Edition.

The Chinese manufacturer has also used its London launch event to confirm UK pricing for the 7T. And without further ado, we've got prices. The OnePlus 7T will cost £549, the 7T Pro is £699, and the McLaren edition of the phone will set you back £799.

The 7T Pro shares many of its specs with its sibling: a screen with a 90Hz frame rate; a triple-camera arrangement comprised of a 48MP main snapper and 16MP ultra wide-angle and 12MP telephoto lenses; a USC-C headphone output; Doly Atmos stereo speakers; and Android 10 OS complete with the new 10.0 version of OnePlus Oxygen skin.

As you'd expect from a 'Pro' model, though, it brings advancements, namely in a 2K resolution AMOLED display. The 7T Pro also benefits from 30T charging (able to replenish 70 per cent of the battery in just half an hour), but the battery is bigger here at 4085mAh, up from 3800mAh on the 7T.

While the 7T pairs 8GB RAM with 128GB for the most affordable option, the 7T Pro's onboard storage starts at 256GB.

Meanwhile, OnePlus' partnership with McLaren (which resulted in the OnePlus 6T McLaren edition in 2018) is entering its second phase, with the OnePlus 7T McLaren edition. Naturally, you get the same features, but the design has clearly been inspired by the sports car manufacturer, with enhanced aesthetic details and a matching charger and cable. The McLaren edition also carries 12GB of RAM onboard – the most on any OnePlus phone to date.

For mobile gamers (and as noted by our friends at TechRadar), a fresh partnership with the developers of PlayerUnknown's Battlegrounds (PUBG) was also announced. It'll mean that future OnePlus devices will be specifically optimised for the game.

Oh, and do you need to update your headphone hue for fall? A new olive green version of the Bullets Wireless 2 headphones was also mentioned at the event.

It'd be nice to drop casually into conversation that you just bought a McLaren though, wouldn't it?