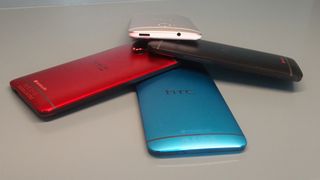 Serial (and reliable) smartphone and tablet tipster @evleaks has suggested that the HTC M8, the codename for the replacement for the flagship HTC One, could be unveiled at its own launch event in New York in March.

The move would follow in the footsteps of its predecessor, the HTC One, which also had a separate event just days before MWC 2013.

It seems this year a new flagship phone is expected to be released after the MWC 2014 in Barcelona.

The HTC One released last year was the first HTC mobile to rival the likes of the Galaxy S4 and the iPhone contender, sporting a premium aluminium unibody design, BoomSound audio technology and an UltraPixel camera.

Current predicted specs for the HTC M8 include a 5in full-HD screen, twin-sensor 4MP UltraPixel camera, a 2.26 GHz Qualcomm Snapdragon 800 processor, 3GB of RAM and Sense 6.0.

It will be followed later in the year by the Samsung Galaxy S5 and the iPhone 6, as the smartphone hardware war ramps up again for another year.