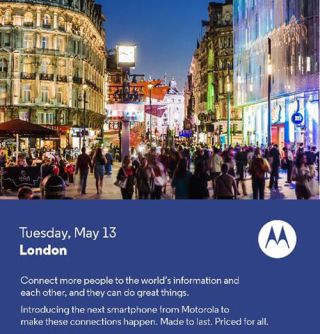 Motorola has announced details of a new smartphone launch in London on Tuesday 13th of May.

Motorola doesn't reveal which phone it is – but it's likely to be the unveiling of the Motorola Moto E.

Motorola states the new smartphone is "Made to last. Priced for all." This suggests the new phone could be the successor the popular budget Motorola Moto G smartphone.

[UPDATE: 6th May] - Rumours of a new flagship smartphone have begun to circle the web. The handset in question is the Motorola Moto X+1, successor to the Moto X. The "Made to last" comment has people wondering if the new phone will be a ruggerised verion of last year's flagship.

The Moto E is expected to come with a slightly smaller 4.3in 720p display, thus giving a higher pixel density than the Moto G. Other specs should include: a dual-core 1.2GHz processor; 1GB of RAM; 4GB of internal storage; 5MP camera and 1900mAh battery.

The Moto X+1 however is rumoured to come sporting a 5.2-inch full HD display, Snapdragaon 800 processor with 2GB of RAM, 12MP camera and 32GB of onboard storage.

The Motorola Moto G launched with a price of just £130 so if the above specs are true, it could mean the Moto E could have a similar price or perhaps even lower.

The Moto X meanwhile launched with a sim-free price of £380, a price many thought too expensive given the specs. Motorola could rethink its pricing tactics when it comes to the launch next week.

What Hi-Fi? Sound and Vision will be at the launch and we'll have a review for you very soon.