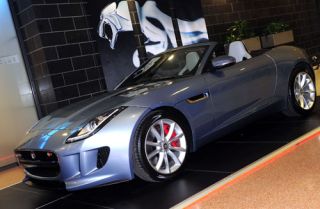 Jaguar dealers from across the UK took delivery of their first F-Type sports cars, which can be specified with a choice of two Meridian audio systems, at a ceremonial handover event at the Ricoh Arena, Coventry.

A Meridian digital theatre was installed in the arena as part of the event, incorporating Meridian loudspeakers, reflective of the same Meridian systems featured in the Jaguar F-Type.

Before departing the event in a spectacular procession, the 59 Jaguar F-Types were arranged in the shape of the letter ‘F’ in the car park, while the last Jaguar E-Type ever produced - the F-Type’s spiritual successor - was on display outside the entrance to the Ricoh Arena and led the convoy of vehicles out of the city.

Meridian uses Trifield technology, a DSP algorithm specifically created for musical reproduction, to deliver "a concert-like experience to both occupants, expanding the sense of space within the cabin", the company says.