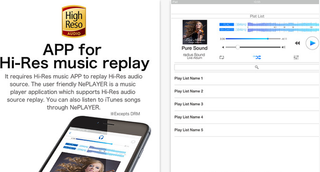 Released in Japan earlier in the year, the NePlayer app is now available around the world for iPhone and iPad via the Apple App Store.

As well as reaching new territories, and coming in English and Chinese versions, NePlayer also supports wireless connection to any DLNA-connected devices on your network.

This means that, as well as playing high-res audio on your Apple phone or tablet, you can connect to a NAS or network music player to stream high-res tunes.

The iPhone can't play high-res audio in its native app, but there have been a few workarounds. The Onkyo HF Player app was the first we came across and now NePlayer is proposing something similar, with some added wireless connectivity.

There does seem to be an Android version, too, though this isn't available in English as yet.

See more on the NePlayer website or on the Apple App Store.

MORE: High-res audio - everything you need to know