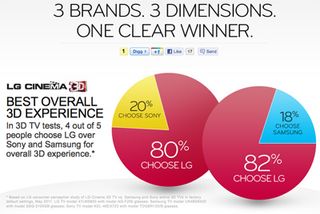 One of the most entertaining audio-visual sagas of recent months has been the ongoing 3D 'format war' between LG and – well, principally Samsung, but in reality any company making or selling 3D TVs reliant on battery-powered 'active shutter' technology.

New readers start here: initial home-use 3D TVs have, to date, mainly used the active shutter, or 'frame-sequential', system, in which alternate frames shown on the TV are destined for left and right eyes, and powered glasses with LCD shutters synchronise with the TV to expose the correct eye at the correct moment. Persistence of vision does the rest, and the viewer sees 3D from a flat screen.

That differs from the system used in cinemas, which uses alternately polarised frame, and simpler non-powered glasses with opposite polarisation for each eye.

In recent times LG has developed a new technology to simplify the design of the TVs used for this polarised passive system: its Field-type Patterned Retarder, or FPR, system is being adopted by a number of other manufacturers, not least the fast-growing Chinese companies.

OK, back to the plot, and so far I've reported on Panasonic's TV press trip to Japan back at the beginning of March, in which the superiority of its active system was a major theme; the Samsung/LG war of words in Korea over the relative intelligence of one of the company's engineers; and most recently Samsung's attempts in the Australian Federal Court to get LG TV ads suspended from broadcast.

Now the battlefield has shifted to the USA, with the launch of an LG website reporting the results of a survey in which 80% of consumers said they preferred passive 3D TV over the active shutter system.

There's some very combative American comparative advertising going on here: 'There’s No Other 3D Like Our 3D. Just Ask Sony & Samsung' screams one headline, linking through to the results of the survey, which was carried out by research company Morpace on behalf of LG.

And the results, based on viewing of disguised 46-47in 3D LCD TVs from LG, Samsung and Sony, are certainly striking – though of course if they hadn't been, we probably wouldn't be reading about them now.

80% of respondents preferred the LG over the Sony, and 82% went for it over the Samsung, while 78% preferred LG Cinema 3D for the immersive 3D experience and the 3D glasses, and 77% for the 3D effect and overall picture quality.

For background, the research took place in May, involved a live controlled test in which those being surveyed saw four TVs in total showing the same content, and included LG's 47LW5600 with AG-F200 passive glasses, Samsung's UN46D6420 with SSG-3100GB glasses, and Sony's KDL-46EX723 with TD-GBR100/B 3D specs.

OK, so a level playing field then, though it's worth noting that the survey didn't include any of the other sets using passive technology – though admittedly most of those use LG panels – nor any plasma 3D TVs. LG, of course, still makes plasma active shutter sets,

As LG says, the study was all about measuring 'consumer preferences between 3D technology which uses active-flicker glasses that sync with an emitter on the TV and passive technology that uses polarised glasses similar to those used in movie theatres.'

Clever talk: 'active flicker' is how LG now describes active shutter systems – including, presumably, its own? – and of course linking its own technology to that used in cinemas helps build the image that it's about the full movie experience at home, not just watching TV.

Of course, the jousting between the two camps will rumble on, with LG suggesting the alternate images combine in the viewer's brain to give the appearance of 1080p HD resolution, and the active-shutter camp saying only its TVs can give real Full HD 3D.

But the preferences of the survey respondents may have a slightly more prosaic explanation than the superiority of one technology over the other: according to research company Morpace, those respondents with children gave one main reason for choosing passive technology.

Kids break glasses, and the passive ones are cheaper to replace.