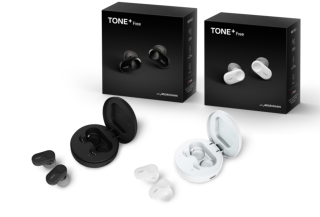 With manufacturers keen to cash in on the burgeoning market for true wireless headphones ahead of the deal-fest that is Black Friday, LG has followed in the footsteps of Apple, Sony, Google, and many others to announce its first pair of true wireless earbuds.

What sets the LG Tone+ Free apart from the ever-growing crowd? Well, the case has a built-in ultraviolet light which claims to disinfect the earbuds as they charge. Ultraviolet germicidal irradiation, if you like.

They're available in black or white and come with an IPX4 rating – so they're splashproof and should survive intensely-sweaty gym sessions. The circular charging case puts us in mind of a makeup case, but however you look at it, LG is offering something a bit different aesthetically.

The Tone+ Free case can apparently deliver you an hour of music from just five minutes of charging, while a full charge is good for six hours, according to LG.

The LG Tone+ Free wireless in-ear headphones will be available in South Korea later this month for 259,999 won, which is roughly £175 if we're converting directly. That said, US and UK pricing or availability hasn't yet been announced. When we know, you'll know.

Best wireless headphones 2019: the best Bluetooth headphones you can buy