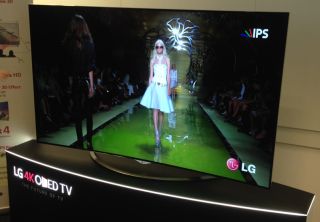 Although it's expected that OLED screens will mainly be aimed at the premium end of the market, LG has underlined its confidence in the technology with confirmation that its first Ultra HD 4K OLED sets will be hitting UK shelves next month.

And the Korean manufacturer told What Hi-Fi? that bendable OLED TVs are very much part of its plans as well, with the first flexible set due to hit the shelves next year – described as the "ultimate solution" when it comes to new TVs as you'll be able to choose and/or switch between a flat screen and a curved screen depending on your tastes and the type of content you're watching. (You can read what we think in our look at the future of TV.)

We first caught sight of a bendable TV from both LG and Samsung at CES 2014 earlier this year – and while no firm details regarding release date and pricing were confirmed, expect prices to be at the higher end of the spectrum.

And what of plasma? Hugo Shin, product communications director for home entertainment at LG, confirmed that production will be coming to an end by the end of the year – and it could be halted as early as next month.

LG says that decision has been motivated primarily due to the declining availability of components, rather than shrinking demand. As a result, LG will be adding itself to the list of manufacturers leaving the plasma production path this year.

See all our LG reviews, news and products