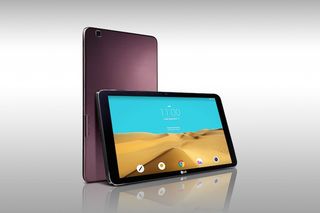 When we reviewed the orignal LG G Pad, we felt the Android tablet was a bit behind the times in terms of specs and performance.

But now the G Pad II is here, and on paper at least, it looks like a more powerful high-tech proposition.

The new G Pad gets a larger 10.1in screen (it was 8.3in on the original), but the resolution remains the same at 1920 x 1200 pixels. The internal processor has been beefed up to a quad-core Snapdragon 800.

The battery has also been supersized to a 7400mAh pack (compared to 4600mAh), which should theoretically mean more time for music, movies and web-browsing.

LG has blessed the Pad with Android's Lollipop operating system and 16GB of memory, which is expandable via microSD.

Reader Mode claims to reduce the blue in the backlight for less strain on the eyes, while Dual Window divides the screen in two, allowing you run two apps simultaneously. The tablet comes pre-loaded with Microsoft Office for Android Tablet.

According to Chris Yie, VP and head of marketing communications for LG Mobile, "the G Pad II 10.1 has been optimised for multimedia consumption. Customers asked for a larger display, bigger battery and faster performance all without raising the price. The G Pad II delivers on all counts."

There's no official news on pricing or availability as yet, but expect more details to be announced at IFA, which runs from 4th-9th September in Berlin.

Read all our LG news and reviews