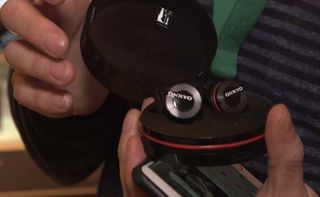 Onkyo has announced a number of new on-ear and in-ear headphones at IFA 2015 in Berlin, with a big emphasis on wireless Bluetooth functionality.

Most intriguing of all is the W800BT, an in-ear design Onkyo claims is the world's first truly wireless earbud. Certainly there are no wires at all associated with the W800BTs - the left and right earbuds communicate with each other, and with your smartphone/portable music player/what-have-you, entirely wirelessly.

Battery charging takes place in the supplied carry-case, and Onkyo suggests 12 hours of wireless music playback is realistic from a single charge.

The W800BTs go on sale in November this year and will cost around €300. See them in action in our video below.

These aren’t, strictly speaking, wireless as they each have a single cable containing the battery and in-line remote with mic, but they all feature wireless Bluetooth functionality and are available in black or white. The two more expensive models also include NFC one-touch pairing.

Both are certified ‘High Resolution’ by both the US Consumer Electronics Association and the Japan Audio Society thanks to their 7Hz – 40kHz frequency response. But (and it’s a reasonably big ‘but’) the H500BT only reach this standard when hard-wired using the supplied 1.2m cable, rather than when operating wirelessly.