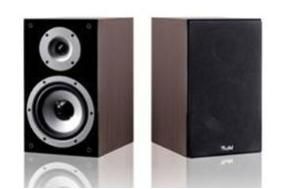 The two-way T 300 is designed for use on shelves, stands or wall-brackets, and stand just 34cm tall. Finished in a combination of wenge and glossy black veneer, the speaker has a maximum power handling of 120W.

The T 400 is the smaller of two floorstanders, and is a four-driver, three-way design. Two long-throw 13cm Kevlar-cone bass drivers are used, along with a 13cm midrange driver and a 28mm fabric-dome tweeter.

Finished in black with a high-gloss front baffle, the speakers stand 95cm tall.

Top of the range is the T 500, which increases the size of the two bass drivers and midrange unit to 17cm, again partnered with that 28mm fabric dome tweeter. The 105cm-tall speakers weigh 26kg apiece, and are finished in wenge with gloss black front baffles.

All the speakers are covered by a 12-year guarantee and come with an eight-week return period if not satisfied. They're available direct from Teufel's online shop.

- There, and we wrote the whole story without mentioning the headline on the press release, which caused some amusement in the office.

So what was it? 'Teufel's Stereo Offensive'.