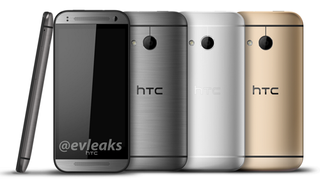 We could soon be seeing a new miniature HTC smartphone if leaked render images are anything to go by.

Usually reliable tipster @evleaks has leaked a press render of an HTC One Mini 2 smartphone, with it taking design cues from the recently released HTC One M8 flagship.

The images do show a few differences in terms of features to the One M8, the first of which is the lack of duo camera. With the One M8, HTC included a secondary camera to capture depth information, it seems this feature won't be present on the Mini version.

It also loses a dual LED flash, with HTC favouring a single option instead. It also has a plastic edge around the phone, in a similar fashion to the original HTC One Mini.

@evleaks didn't reveal any specifications for the handset but current rumours are pointing towards a 4.5-inch 720p display, Snapdragon 400 processor, 13- and 5-megapixel rear and front-facing cameras and Android 4.4.2 running Sense 6.0.

The leak didn't mention any information on pricing or a release date for the One Mini 2, but with images now appearing online, an official unveiling may not be too far away.