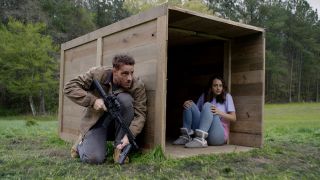 Hollywood wants to survive the current coronavirus pandemic as much the rest of us and, to give it a fighting chance, studios are handing some films which would've been enjoying cinema runs right now, home entertainment releases on on-demand platforms. Some films that were lucky enough to enjoy theatrical releases earlier in the year have been rushed to VOD services months ahead of time, too.

Sadly, many of the year's big hitters have been delayed, for up to a year, to ensure the wide theatrical window they deserve – including James Bond No Time to Die, Marvel's Black Widow, DC's Wonder Woman 1984, Fast & Furious 9, Disney's Mulan, Top Gun: Maverick and sequels to A Quiet Place and Peter Rabbit.

But thankfully that isn't the case for all of them. While cinemas are closed, cinephiles can still get their new-film fix by diverting their regular cinema ticket budget to digital rentals and purchases on services such as Sky Store, Amazon Prime Video and Apple TV.

Recently released on digital video-on-demand platforms and the Disney Plus subscription service in the US, Pixar's latest feature is now available to pre-order in the UK through on-demand services such as Sky and Amazon.

It will be available to watch from Monday.

Onward hit cinemas just before lockdown so didn't get a fair theatrical outing – a shame considering the family adventure animation has been critically acclaimed for its quintessential Pixar charm, emotional clout and humour. One to hunker down with the kids to, it seems.

Based on the real-life army wives who formed a choir on a military base during their husbands' Afghanistan tours, this Kristin Scott Thomas-starring comedy-drama only spent a few weeks at the box office before the coronavirus outbreak forced cinemas to close. For that reason, its digital release has been brought forward from autumn.

Sony Pictures Entertainment has accelerated the digital release of this Vin Diesel-starring superhero action film, which was due to hit cinemas in mid-March. Based on the bestselling comic book, and the first instalment in a new Valiant Comics universe franchise set to take on Marvel and DC, it follows a soldier who is recently killed in action but brought back to life as the superhero Bloodshot by a nanotechnology corporation.

In the shadow of a dark internet conspiracy theory, a group of globalist elites gathers for the very first time at a remote manor house to hunt 12 unwitting humans for sport. With its US release having been postponed last year following two mass shootings in the country, this surprisingly humorous Universal Pictures horror/thriller has now gone straight to streaming services in the US and UK.

Another early Universal Pictures release. From the writer of Saw and Insidious comes a smart thriller about a woman who suspects she is being terrorised by her abusive ex-boyfriend scientist... weeks after he supposedly committed suicide. Lead by a deft performance by Elisabeth Moss, it's an ideal Saturday night flick. No, really.

Anya Taylor-Joy steers away from her horror film roles (The Witch, Split, Morgan) to star in the latest big-screen adaptation of Jane Austen's 1815 beloved novel. Set in 1800s England, this witty, lighthearted and faithful comedy-drama follows Emma Woodhouse, a well-meaning but selfish young woman who meddles in the love lives of her friends.

A quirky sci-fi horror helmed by the wonderful Jesse Eisenberg and Imogen Poots, Vivarium follows a young couple's search for the perfect home and their consequential entrapment in a mysterious and surreal neighbourhood of identical houses.

Disney's latest live-action film is skipping cinemas and coming straight to its video streaming service Disney+ on 12th June. The Kenneth Branagh-directed fantasy adventure is based on the book by Eoin Colfer and follows the journey of 12-year-old genius Artemis Fowl, a descendant of a long line of criminal masterminds, as he desperately tries to save his father who has been kidnapped.

11 of the best documentaries on Amazon Prime Video

15 of the best horror movies on Netflix