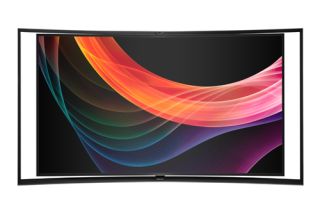 We got to clap eyes on Samsung’s first curved OLED TV, the Samsung KE55S9CSTXXU or S9C for short. And it’s really quite something.

Curved OLED is suddenly all the rage, with Samsung and LG releasing such sets, followed by the Sony KDL-65S990A curved LED.

Having seen early prototypes, we got to take a look at the finished article at a swanky central London flat. We weren't allowed to take pictures (or wear shoes) but here are our first impressions of the 55in £6999 Samsung S9C curved OLED.

The Samsung S9C curved OLED is a 55in screen sitting in a large aluminium frame with chrome plating. This frame serves a few purposes.

First off, it’s a stand. It takes up most of the TV’s footprint, along with a single support round the back. Samsung calls this the ‘Timeless Arena’ design.

We’re not entirely sure what that means, but the frame holds the screen in a way that makes it look like a floating image. It also handles the TV’s sound: there are two hidden 10W speakers, along with a 20W subwoofer.

The frame makes the TV looks more curved than it actually is. That’s how you have a TV that looks a bit different without going too far: make a gently curving screen and surround it with less-gently curved metal.

The S9C is an outlandish design, not unlike a concept car: it shouldn’t work, but it’s hard to deny it’s very cool.

But what’s the point? To make things more immersive. The wraparound screen is designed to help draw people into the picture. It seems to work.

It’s not quite like having an IMAX screen at home, as Samsung claims, but the feeling of immersion is not entirely dissimilar.

Viewing angles are pretty good. It’s quite hard to tell from limited playtime in a brightly-lit room, but it’s certainly no worse than watching a flat TV from the side.

Walking around the screen at various distances didn’t appear to make the image any worse. Samsung says it’s because the OLED technology offers wider viewing angles than LED or plasma.

Speaking of which, the OLED technology seems very impressive. It’s hard to tell for sure, of course, Samsung had dialled the settings right up to the point of retina-searing before showing us stock footage of rose petals and smiling faces...

But from what we saw, dynamic range was very good, colours were rich to the point of being psychedelic, and black levels were properly dark.

Note that this isn't 4K, it's 'only' Full HD (a resolution of 1920x1080). Samsung didn't seem too bothered about the emerging 4K market, pointing out that curved OLED is about the experience rather than absolute detail.

Impressive stuff, although we’re curious why we’re seeing a curved OLED hit our shores before a flat one. We asked Samsung how people would wall-mount the S9C. The reply? “Don’t.”

Samsung was also keen to point out the TV’s Multi View feature. This allows two people to watch different things at the same time. The S9C displays both images simultaneously, and special active 3D glasses separate them for each individual.

A button on the glasses allows you to flick between the two images in case you change your mind and want to watch the same thing after all.

The 3D glasses also have hidden headphones, so you can truly immerse yourself in your own experience while someone else does the same thing. Ironically, Samsung says Multi View allows people to be more sociable...

Samsung’s first curved OLED TV is an impressive specimen. Whether anyone actually needs one is another matter, but it’s certainly different. And from what we saw, it worked well.

Of course, we’re looking forward to getting a Samsung curved OLED TV in to our test rooms before making a proper judgment. Watch this space for our full review, meanwhile, you can see it for yourself at John Lewis or the Samsung Brand Store, where it's now on sale for £6999.