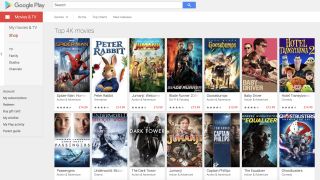 The caveat of new technology? Higher prices. The likes of 4K TVs, Blu-ray players and Ultra HD Blu-ray discs naturally attracted a premium over their HD companions when they arrived.

So did 4K film purchases from online video services.

As with everything else, though, their prices are dropping. Last year Apple decided to upgrade already purchased HD movies to 4K HDR versions for free, and now Google Play is following suit.

When 4K titles are available from participating Hollywood studios, Google Play will upgrade any past SD and HD film purchases so they can be streamed in 4K.

The service is also lowering the prices of its 4K titles, but while it isn’t selling them for the same price as HD films, as Apple is, there’s not much in it. Many of the service’s ‘top films’ are £13.99, with the very latest costing £1 more and older titles priced only £7.99. A handful of those titles can also be rented in 4K for £6.99.

The Google Play app’s 4K films are also now available on Samsung smart TVs in addition to 4K Sony sets, and Google says 4K LG TVs should be next on the list. Of course, they can also be streamed through Google's Chromecast Ultra too.

The price drops, upgrades and expanded availability will only benefit customers in the US and Canada for now, but we’d hope it’d be rolled out internationally in the not too distant future.