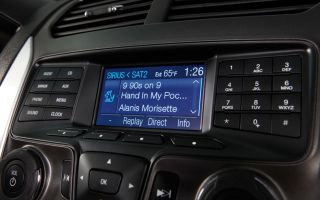 The Alliance of Artists and Recording Companies (AARC) - a non-profit group that represents over 300,000 artists - has filed the lawsuit against Ford and GM and the manufacturers' infotainment suppliers - namely Denso and Clarion.

The lawsuit focuses on Ford's "Jukebox" feature and GM's "Hard Drive Device", features that allow users to rip and store content from a CD on to an internal hard drive. The AARC says these fall under the Audio Home Recording Act, which states that companies need to pay royalties on "digital audio recording devices".

According to the AARC, neither Ford nor GM have paid any royalties for installing the devices - found on vehicles such as the Ford Taurus, Ford Explorer, Chevrolet Volt and GMC Terrain. Denso and Clarion are also required to pay royalties as suppliers of the CD-players, says the AARC.

AARC Executive Director Linda Bocchi says: "22 years ago, co-operation between music creators and device manufacturers resulted in legislation that led to a digital electronics revolution. But having reaped the benefits of this bargain, Ford, GM, Denso and Clarion have now decided to ignore their obligations to music creators and declare themselves above the law.

"While no-one likes legislation, Ford, GM, Denso and Clarion have stonewalled long enough, and we are determined to collect the royalties of our members - and all artists and music creators with rights under the AHRA - are owed."

Artists and record labels are seeking both actual and statutory damages, which could stretch to hundred of millions of dollars. Not only this, but they want to prevent the manufacturers from installing the unauthorised devices in their vehicles. It should be noted that a computer's CD-ripping capabilities don't fall under the same law, because the computer is not marketed as a musical recording device.

GM has yet to comment, but a Ford spokesperson says: "We believe we fully comply with all of our contracts. We are currently exploring the case and have nothing further to share at this time."

MORE: 13 car audio milestones from AM to MP3