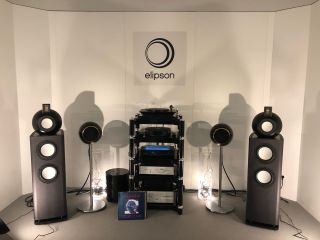 We heard a brief demo at the show, with the speakers hooked up to Bryston electronics. As you can see from the photo above, the design may look familiar to B&W fans, although it is in fact based on an original Elipson speaker from the 1960s, hence the Legacy name.

Elipson has added one of its familiar spherical speaker housings - which incorporates an AMT ribbon tweeter and 6.5in aluminium/ceramic midrange cone - to a more conventional floorstanding cabinet beneath.

The latter incorporates two 8in bass drivers with cellulose paper cones, and has a downward-firing bass port (hence the gap between the base of the cabinet and its plinth).

Keeping to the spherical theme, Elipson also has a more affordable product in the pipeline - a new wireless €799 speaker called the W35.

It's kitted out with wi-fi, Bluetooth and Airplay 2 and is powered by a 350W RMS amp. Spotify, Tidal, Deezer and internet radio are integrated as standard and it can be controlled via the accompanying app or, if you prefer voice control, by using a connected Alexa speaker such as an Amazon Echo Dot.

There's a digital input for connecting it to a TV if you wish, and two W35s can be combined to create a stereo pair. A bespoke floorstand and wall mount are in the works and should be available at launch this autumn. Initially the Elipson W35 will come in just one finish, gunmetal grey.