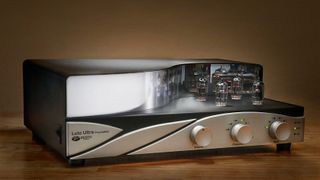 Zesto Audio's new Leto Ultra Preamplifier has an unusual six-position ‘Presence’ control. "This control adjusts the harmonic balance in the midrange and high frequencies allowing you to dial back what you may consider to be too bright, edgy or aggressive," says George Counnas, Zesto's designer.

"This is an exceptionally useful tool that addresses the inconsistencies of mastering from any source. It’s easily adjustable 'on the fly' with your remote or manually for each piece of music."

As one would expect from Zesto, which has always been a glass audio company, the Leto Ultra’s signal path is fully valve-based, but Counnas has implemented a new 12DW7/ECC832 valve configuration that he says will provide the cleanest and most musical signal path for your audio signal.

The Leto Ultra preamp has three levels of gain (3dB, 6dB and 9dB) for each input and there are three fully balanced (via transformer) inputs as well as three unbalanced inputs. Zesto has also introduced a new infra-red remote control that allows remote adjustment of input, volume, presence, muting, mono/stereo switching and gain, though these adjustments can also be made from the front panel.