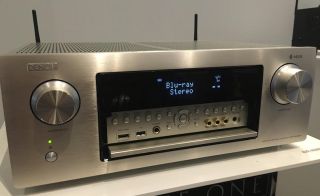 We’ve already reported on the new entry-level models from Denon’s fourth generation of X Series home cinema amps. In fact, we’ve already awarded the AVR-X2300W a five-star review, so we’re obviously excited to see the company has just added a couple of premium models higher up the range.

Needless to say the proverbial kitchen sink has been thrown at the AVR-X6300H (pictured above) and its sibling, the AVR-X4300H (pictured below), when it comes to design, features and connectivity.

There’s also DTS:X and Dolby Atmos support out of the box, with support for Auro 3D to come via a firmware update at a later date.

For the first time on any Denon AV receiver, both of these premium models have support for Denon’s HEOS HS2 Series family of multi-room wireless speakers buit-in, so they can slip into any potential Denon-based multi-room solution.

Both amps are set up for streaming, with support for Tidal, Deezer, Napster, Soundcloud, Spotify Conect, Bluetooth and Apple AirPlay all squeezed in. The internal DAC supports hi-res audio streams up to 32-bit/192kHz.

Denon will also be offering a new Audyssey smartphone app (for Android and iOS) if you want to delve deep into your receiver’s set-up. It isn’t a freebie though, and will cost around €20 from the relevant app stores when it arrives in October.

The main difference between the AVR-X4300H and the AVR-X6300H is that the former is a nine-channel amp running at a claimed 200W per channel, while the latter ups the ante to 11 channels and 205W per channel.

Both models are due to hit shops in October 2016.