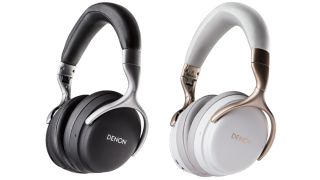 Denon has expanded its Global Cruiser premium headphone range with two wireless models, the AH-GC25Ws and AH-GC30s (pictured top), and the wired AH-GC25NCs.

The latter two also boast newly-developed noise-cancellation functionality - which puts them in competition with the likes of Sony's class-leading WH-1000XM3.

One tap on the earcups also activates a feature that lets ambient sound back in so you can hear, say, a flight announcement without having to remove the headphones.

Both wireless models – the AH-GC25Ws and AH-GC30s – utilise aptX HD Bluetooth technology, although a wired connection through USB connectivity is also available.

Battery life is a claimed 20 hours when using both noise cancelling and Bluetooth, or 25 hours when only using noise cancelling. They also allow two devices to be connected to them simultaneously. The wired AH-GC25NC’s battery life with noise-cancellation is naturally higher, at 40 hours.

The AHGC30s – the most premium model of the three – use the 40mm FreeEdge drivers normally reserved for Denon’s flagship range, with floating diaphragms supposedly reducing resonance and helping to deliver precise pistonic motion.