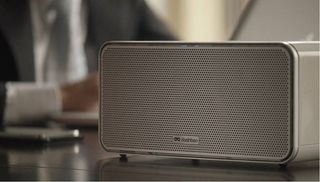 The device – described as a "mobile party powerhouse...without power cord" – has been backed to the tune of $90,000 at the time of writing, which is nearly double the original $50,000 funding aim. So it should be a real product some time soon.

Flicks has been developed as an "all-in-one, Bluetooth-enabled boombox" that will let you stream music or video via HDMI from devices such as Roku's Streaming Stick and Google's Chromecast.

MORE: Read all our projector reviews and news

Dashbon says the product will display a 100in image from more than 8ft away, with the battery life on the Flicks claimed to be up to 28 days on standby – or double on the Flicks Range edition.

The speaker component is housed within an airtight enclosure and contains two custom-designed neodymium speakers, as well as a subwoofer with bass radiator powered by a dedicated amp.

Meanwhile, the full-colour RGB LED light source delivers 720p HD pictures with the help of Texas Instruments's DLP Technology. It has a resolution of 1280 x 800 and a 10,000:1 contrast ratio.

It streams content from Bluetooth 4.0-compatible devices and claims a wireless range of at least 33 feet.

Apart from battery life, the only difference between the Flicks and Flicks Range is the weight – Flicks weighs in at 2.45kg, while Flicks Range is 1kg heavier. All other features, it seems, are the same.

Mass production is expected to begin in May/June, with Flicks and Flicks Range set to cost $599 and $699 respectively – although you can still qualify for early bird rates via its Indiegogo page.