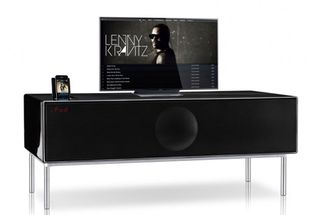 CES 2012 may officially be over, but new product launches from the show are still coming thick and fast.

Just before we left Las Vegas we were visited by the team from Geneva, maker of Award-winning iPod docks, with details of its latest product, the Model XXL.

And large it certainly is, as the photo above clearly shows. In fact, the Geneva XXL is a combined home cinema and music system, kitted out with AirPlay to boot.

The cabinet, made from wood and finished in red, black or white piano lacquer, is big enough to support a flatscreen TV up to 65in. There's also storage for your set-top box, Blu-ray player or games console.

On the left is an iPhone/iPod dock, and there's a built-in FM/DAB/DAB+ radio plus the aforementioned AirPlay compatibility. An HDMI socket allows you to connect your TV too.

The sound system incorporates a powerful digital amplifier, seven speakers and an 8in woofer. It's expected to go on sale for around £2500 this winter.

Geneva says it is also developing new AirPlay versions of its Model L, M and S dock systems, to be released later this year.

At the other end of the size spectrum, Geneva unveiled the compact, portable Model XS speaker system as we reported last week.