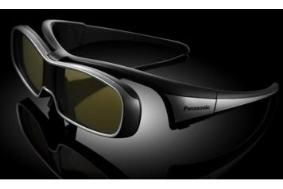 Panasonic has revealed a few more tantalising details about its 2010 product range – including the fact that its new plasma line-up has been worked on by ex-Pioneer Kuro TV engineers. It also says its new Blu-ray players will offer class-leading loading speeds – taking a mere half a second to display a disc!

But first, back to Panasonic's big theme here at CES - 3D. The UK will see the launch of the first Panasonic 3D plasma by the summer – a 50in model (all Panasonic's 3D TVs are planned to be plasma), which will be launched simultanously with a 3D Blu-ray player, The products will come bundled with 'at least one pair of glasses', Panasonic assures.

Good news for specs wearers
Those natty, Oakley-sunglasses style specs are designed to be lightweight and flexible enough to accommodate a range of headsizes - and to slip over the top of your regular glasses, if needed.

Panasonic asserts that its 3D plasma is also designed to excel with 2D content; it feels many manufacturers are putting too much onus on the TV being 3D-optimised, rather than offering true all-round quality.

It predicts strong demand for the new 3D sets; 95 percent of visitors to its recent UK roadshows showcasing a prototype of the 3D plasma with a range of content – including sports and arts coverage, as well as Avatar footage – said they were interested in having 3D at home.

Kuro engineers go back to black
But it's not just 3D TVs that are getting some special attention: Panasonic's 2D Viera range has had an overhaul for 2010, too. Key to the quality enhancements is 'Infinite Black Panel Pro' – developed by engineers who previously worked for Pioneer on the class-leading Kuro plasmas.

Panasonic displayed one of these new models against its 2009 plasmas, and the new panel was noticeably, well, blacker, with astonishing contrast levels – we look forward to testing those when they arrive in the UK this summer.

They'll be preceded by a wide line-up of plasma and LCD sets – including LED-backlit models – which could be in the shops as early as next month. Freeview HD models are also in the range.

We'll bring you a full run down of UK model numbers and specifications nearer the time; we've been promised an in-depth briefing back in Blighty.

The fastest Blu-ray in the West
Also due this Spring are new Blu-ray players – provisional model numbers Panasonic DMP-BD65 and DMP-BD85 – that the company claims will load a disc in a mere 0.5 seconds. We can't wait to try that one out!

Panasonic will also expand its portable Blu-ray player line-up, and add to its Blu-ray cinema system range. Its Freesat Blu-ray recorders will be joined by Freeview HD models, too.

We've been promised review models of all the new kit as soon as its available – watch this space!

As expected, Panasonic is making a big thing of 3D TV at CES, launching its VT25 series 'Full HD 3D HDTVs' at the show, and allowing visitors to see content shown not only on the new TVs but also a mighty 150in+ plasma screen.

It's confirming that the 3D sets will be plasma models, will come complete with one pair of shutter glasses, with extra pairs available as an option, and that the new sets will also offer a new Infinite Black Pro display giving 5,000,000:1 native contrast, Viera CAST internet access, THX certification and ISF calibration capability.

The new models also use new phosphor and drive technology to give faster illumination and pixel switching, allowing smoother rendition of the rapid image changes required for the display of 3D content.

Plasma best for 3D?
Buried in the information from Panasonic is a claim for the superiority of plasma over LCD TVs as a means of showing 3D at home: it says "Because displaying 3D images involves alternate displays of left- and right-eye images, reducing the overlap (cross-talk) between these images is essential for high-quality 3D images.

Screen sizes in the mainstream Full HD 3D line-up range from 50in to 65in, and the 3D TVs are just a small part of a massive range of new Panasonic plasma screens, topping out with a massive 152in display capable of both Full HD 3D and 4Kx2K resolution.

With 4096x2160-pixel resolution, this screen uses "a new technology that enables even and stable discharge.

"Thanks to this discharge technology, the new panel can provide full HD images for left and right eyes formed with twice the volume of information as regular full HD images across the vast expanse of the screen."

A 3D camcorder for the pro
But 3D doesn't stop with the TV: Panasonic also has its first 3D camcorder, a twin-lens unit destined to go on sale in the Autumn.

Designed to be both lighter and more affordable than conventional 3D camera rigs, it's aimed at the professional market and records to SDHC or SD memory cards.

The company is also launching its first 3D-capable Blu-ray player, the DMP-BDT350, along with three other conventional players, during the course of this year.

LED edges into the range
Finally, Panasonic is adopting LED backlighting as part of a hugely expanded LCD TV range, the expansion being handled by the opening of a new TV factory in Himeji, Japan.

LED edge-lit models form the LED-LCD D2 series, comprising just two models: a 37in and a 42in. Panasonic says the choice of edge-lighting, with an array of LEDs inside the frame of the screen, plus a diffuser panel behind the LCD, allows the TVs to be made very thin, as well as reducing power consumption.

The D2 series, just one of a seemingly bewildering range of LCD line-ups which also includes a new size – 22in –, has an integrated iPod dock and four HDMI inputs.