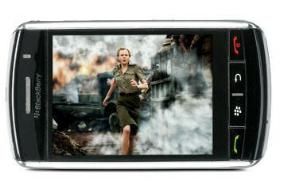 According to reports on the web, the device will be launched in November and is a similar size to Apple's iPad.

Users will be able to connect their BlackPad to the internet using the wi-fi or Bluetooth connection of their mobile phone, rather than having to pay separately for 3G network access as users of the iPad do.

Our sister site Stuff.tv says that the BlackPad could have a 7in touchscreen, run on a 1GHz processor, have a 16MP camera and 1080p video playback.

Other manufacturers are also working on tablet devices. Samsung is expected to launch its Galaxy tablet before the end of September, and LG plans to introduce one under its Optimus brand by Christmas.

• In a separate development, BlackBerry this afternoon revealed its new Torch smartphone. It uses RIM's Blackberry 6 operating system which includes an improved mobile web browser and a "next-generation" messaging system.

BlackBerry OS 6 also includes support for social networking sites such as Twitter and Facebook, and has MediaSynch functionality for wireless syncing to a music library via wi-fi.

The Torch has a 3.2in screen, Qwerty keyboard, 5MP camera, 4GB of memory, plus wi-fi, Bluetooth and 3G connectivity.