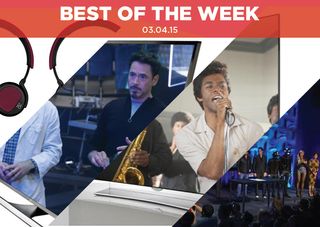 This week's selection of reviews were big ones starting with an exclusive review of LG's 55EG960V 4K OLED TV. Elsewhere there was a blu-ray player from Pioneer (BDP-LX58), a pair of headphones from Bang & Olufsen (BeoPlay H2) and another 4K TV (not OLED, unfortunately) in Samsung's UE65JU7000

Tidal music relaunches in US as "first artist-owned entertainment platform"

Music streaming service Tidal was relaunched in the US this week, and it marked the occasion in star-studded fashion with a bevy of music artists pledging their support for the service.

The relaunch – under the eye of new owner, US rapper Jay-Z – added a new tier to its subscription service, with a $10/£10 level that offers up to 320kbps AAC streams in a bid to compete with Deezer, Rdio, Spotify et al.

It was also suggested that artists would offer exclusive content to the service, but what form that takes remains to be seen.

This takeover adds to the gathering movement towards streaming after the US market saw streaming overtake physical CD sales in the US last year.

Will Apple's iTunes streaming service blow its rivals out of the water?

We're still awaiting word on Apple's music streaming service, but it hasn't stopped some from speculating on its possible impact.

Mark Mulligan at Media Insights and Decision in Action (MIDIA) wrote a blog post on the matter and, according to the research his company carried out, almost a fifth of US customers would pay $8 a month for a music streaming service from Apple.

That rises to 28 per cent amongst iOS users, with 63 per cent of existing music subscribers saying they'd consider a subscription to an Apple service.

Whichever way you look at it, Apple appears to be quids in. Expect a reveal at the WWDC event in June.

READ MORE: Will Apple's iTunes streaming service blow its rivals out of the water?

V-Nova – a video and image processing company – has claimed to have come up with a more efficient way of transmitting 4K broadcasts and it has told the BBC it has the backing of at least 20 companies for its idea.

That idea is to transmit content through broadband pipelines at only 7-8Mbps, undercutting the current 25Mbps required for the likes of Netflix.

This breakthrough could lead to smartphones and tablets processing 4K video - but we'll believe when we see it.

OLED and 4K make for an irresistible combination as this exclusive review of LG's 55EG960V shows.

While it is undoubtedly pricey, the picture quality on offer is astounding. The amount of detail on display and the depth of the colours in each frame make for a spectacular image.

Expensive? Yes. But this TV has laid down a marker and it's up to the rest in the OLED field to match it.

B&O specialises in being stylish, and the H2s offer that in spades. They also back the looks up with a fine audio performance.

The sound here is never overwhelming, keeping the frequency ranges in check and producing a composed performance.

If you wanted a pair of headphones that look and sound good, the H2s are a great option.

While this Pioneer Blu-ray player lacks the 'smarts' to compete with other disc spinners of its ilk, the performance on show almost makes that a moot point.

The LX58 produces a wonderfully crisp image with convincing images and colours that are rarely overdone. Audio wise it doesn't disappoint with a solid, focused sound.

Other Blu-ray players offer more features, but if picture and sound are your priority then make this the place to start your search for a new player.

Samsung enjoyed great success with its TVs last year and now it's back with newer versions. Can it stay ahead of the competition?

Quite possibly. Picture performance is again top notch – we'd say even better than last year – with a natural, detailed look that doesn't skimp on the detail.

We've come to expect excellence from Samsung's TVs and despite a few issues here and there this one doesn't disappoint.