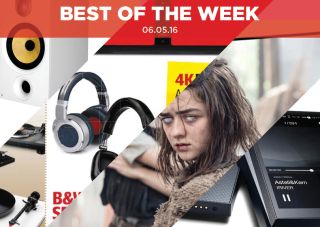 This week saw B&W sold to a start-up company in Silicon Valley, Astell & Kern release a new hi-res player and Warner Music sign a long-term deal to use the MQA audio format.

This week also sees the June issue of What Hi-Fi? hit newsstands. In it you can read a test on six soundbars, two digital-ready record decks going up against the Rega RP1 and a feature on 4K Blu-ray vs 4K streaming.

And we've been reporting live from the Munich High End Show.

For more reviews and features, you can pick the issue up from your local newsagent or download it to your smartphone or tablet.

MORE: User review of the month, April – Neat Momentum 3i

The owner of said start-up is Gideon Yu, who previously was the chief financial officer (CFO) at Facebook and is currently the co-owner of the San Francisco 49ers NFL team.

Eva Automation has yet to make a product, but Yu apparently set the company up with the multi-room market in mind, and has been looking for a suitable audio company to partner. To read more, click below.

Astell & Kern’s definition of affordable may provoke some quizzical looks, but its latest hi-res player is one of its most affordable yet.

It supports 24-bit/192kHz audio as well as DSD files (converted to PCM) and DLNA streaming, and features a single AK4490 DAC that can also be used as a USB DAC.

Support for MQA is gaining traction with the news that the Warner Music Group has signed a long-term licensing deal.

The deal makes Warner the first big label to use the format, with the music company’s back catalogue – which includes Coldplay, Prince and Madonna – set to be made available to stream/download in studio master quality across online services.

It’s not the only good news, either, as Bluesound confirmed MQA support for all its players from 1st of June.

Dynaudio aims to “top a legend” with new Contour speakers

ELAC celebrates its 90th anniversary with new speakers and turntable

LG is back with another OLED TV and it continues the company’s fine recent form.

This TV crams in as much technology as possible (4K, HDR, OLED, Dolby Vision), which should mean it’s as future-proof as they come.

Still, it’s the performance that gets the plaudits. Visuals are depicted with lush colours and deep blacks, all amounting to a hugely insightful picture. It bodes well for the 4K flagship efforts.

You can rely on Sennheiser to do something different - and the HD 630VBs aren’t a let down in that respect.

The VB stands for Variable Bass and, as the name suggests, it allows the wearer to tweak the bass settings as they like.

Flat screen TVs aren’t typically great with sound, and that’s where JBL comes in with this soundbar-cum-speaker.

It’s a compact solution to your TV woes that packs in optical and 3.5mm inputs along with plenty of other features, including connectivity to other JBL speakers.

It is a tad undercooked in bass performance, but if you’re short on space and money, it’s a decent choice.