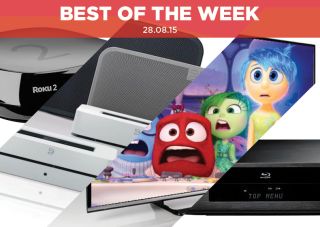 This week Bluesound announced the second generation of its Award-winning multi-room products and Audiolab detailed its upcoming trio of hi-fi separates.

Elsewhere it's been another strong week on the reviews front, with Cambridge Audio's CXU universal player leading the line, Panasonic making waves with its TX-50CS520 Full HD TV and the Roku 2 streaming player proving to be another strong effort from the company.

MORE: BT Sport Ultra HD: What is it? How can you get it?

MORE: Competition: Win a night at a very special event

MORE: That Was Then... The birth of music downloads, file sharing and piracy

Something very special this way comes... Sennheiser teased a top secret new product at its 70th anniversary shindig this week, and we were on hand to get some pictures.

Only a few snippets of information were released, but if a headphone system which uses fine Carrara marble of the type once used by Michelangelo doesn't pique your interest, then we're not sure what will...

Bluesound has announced the second generation of its Award-winning multi-room products, sporting a range of various tweaks, upgrades and redesigns.

The highlights see the Bluesound Vault's storage being bumped up to 2TB from 1TB, the Node and Powernode will be receiving performance upgrades with the addition of aptX Bluetooth and there's the introduction of the Pulse Mini wireless speaker.

These revamped products will be available soon, with all of them set to go on sale in September.

Audiolab announces a trio of hi-fi separates, including new M-DAC+

Audiolab has opened up about its upcoming hi-fi separates that include a new CD player, amplifier and a new version of its M-DAC.

The 8300 will offer a tweak to the existing 8200 CD player, with a slot loading CD mechanism and support for DSD. We have an exclusive review of it in the October issue of What Hi-Fi? coming next week.

The 8300A integrated amplifier can be partnered with the 8300 CD player with a phono input included as standard. The new M-DAC is a premium version of the existing DAC that has the ability to support resolutions for 32-bit/384kHz.

IFA 2015: Raumfeld Soundbar can be used for TV or multi-room audio streaming

Exclusive UK preview of Queen: The Studio Collection at the National Audio Show

Canton combines a soundbase with an AV amplifier

It's not often we see a universal player trot through the test rooms at What Hi-Fi?, but Cambridge Audio has served up the CXU, and it's something of a beauty.

It's part of the company's new CX series and, as with the others in the CX line, we're impressed by what it has to offer. Picture quality is excellent with films, while music performance is very enjoyable and there are plenty of features and connection options.

If you're in the market for one disc-spinner to do it all, the CXU is well worth an audition.

Panasonic is having a renaissance in terms of TV performance, and its fine recent form continues with the Full HD TX-50CS520.

There's no 4K or 3D here. Instead this Panasonic set offers a superb HD performance with a vibrancy to the image that's complemented by sharp, detailed lines.

More connections wouldn't go amiss, but for £500 this is a fine, no-nonsense option.

The Roku 2 arrives, confusingly, after the Roku 3. It forms part of the company's new line up of streaming players for 2015.

The Roku 2 offers better performance for less money and that's an idea we can get behind.

It's simple to use, with plenty of streaming channels to browse through and super-slick performance. It's a great reason to jump on the streaming bandwagon.