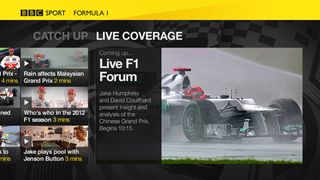 The BBC has today launched its new sport app for smart, connected TVs, enabling viewers to access the BBC's interactive coverage of major sporting events via the BBC red button.

During races there'll be access to on-board cameras and the 'driver tracker' that shows where each car is on the circuit. As well as the races themselves, there will be full coverage of practice and qualifying sessions.

In the coming months, the BBC Sport app will be expanded to include coverage of Euro 2012, Wimbledon and the London Olympics.

During Euro 2012 and Wimbledon, the new BBC Sport app will offer a range of alternative coverage options in line with those offered on the BBC Sport website, including additional matches/games, choice of audio commentary options, stats and rolling highlights.

Throughout the London 2012 Olympics Games, the new BBC Sport app will give audiences access to 2,500 hours of content and up to 24 simultaneous live events, all in high definition, ensuring that, for the first time ever, millions of viewers across the UK will be able to watch every Olympic sport, live from every venue.

From today, the BBC News and Sport apps will both be available on Virgin Media's TiVo service, bringing the BBC red button service to around 500,000 Virgin TiVo homes for free.

The BBC Sport app will be made available on a range of additional devices soon. For more information, read this BBC blog by Aaron Scullion, executive product manager, BBC Future Media.