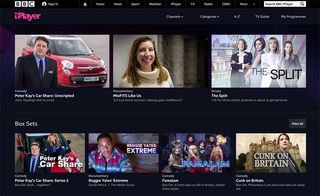 The meteoric rise of Netflix and latterly Amazon Prime Video has clearly got traditional broadcasters a little worried. While BBC iPlayer continues to break records, there's no denying streaming services, and the increasingly big-budget TV shows they commission, are the talk of the office kitchen. So it's no surprise the BBC, ITV, Channel 4 and others are looking for new ways to compete.

It looks increasingly likely this will take the shape of a joint streaming service, bringing together the big UK broadcasters and TV companies, such as NBC Universal, who make some of the channels' flagship programmes.

The idea, first broached back in 2016, looks to be back on the agenda, with the Guardian reporting "early-stage talks" have taken place on the subject. One source matter-of-factly suggests the service would be a "public service broadcaster domestic competitor to Netflix". It's not the first time a joint service has been mooted, with the ill-fated 'Project Kangaroo' failing to get off the ground as far back in 2009.

The BBC has redesigned iPlayer to make it more like Netflix in recent years, and is said to want its service to form the crux of a new joint offering. ITV and Channel 4 of course both have online, on-demand content offerings of their own.

Netflix announced back in January that it had 117 million subscribers worldwide, while the BBC announced this month that iPlayer had its best ever Q1, seeing 315 million programme requests.

Last year the BBC director-general, Lord Hall, said he wanted "to reinvent public broadcasting for a new generation", with the ambitious aim to be the number one online TV service. Could a joint streaming service be the answer? We shall see.

20 of the best TV shows to watch on Netflix