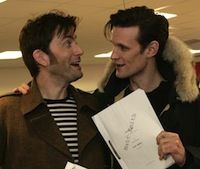 The BBC has announced that it's suspending 3D programming for an indefinite period: this weekend's Wimbledon semi-finals and finals will be shown in 3D as planned, as will the Doctor Who 50th anniversary special to be shown in November

However, that drama – with Matt Smith and David Tennant (above) – will be one of the last BBC 3D broadcasts for the foreseeable future.

Citing a 'lack of public appetite' for the lack of uptake of 3D, which she said was 'quite hassle' for viewers, BBC head of 3D Kim Shillinglaw told Radio Times 'I think the BBC will be having a wait-and-see. It's the right time for a good old pause.'

She added that 'I have never seen a very big appetite for 3D television in the UK. I think when people watch TV they concentrate in a different way. When people go to the cinema they go and are used to doing one thing – I think that's one of the reasons that take up of 3D TV has been disappointing.'

Shillinglaw, who ail return to her main role as head of science and natural history at the BBC, said that 'I am not sure our job is to call the whole 3D race.'

The BBC broadcasts have only ever been part of a two year 3D trial the corporation started in 2011, and while it's estimated that half the 1.5m 3D-equipped households in the UK watched the London 2012 Olympic opening ceremony in 3D, by Christmas last year the figures had plummeted, with just 5% watching the Queen's Speech and children's drama Mr Stink.

The BBC move follows US broadcaster ESPN's decision to halt its 3D services, due to a similar lack of public interest.