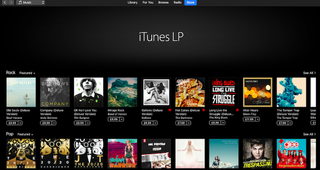 iTunes LP is a bundled album format that lets users purchase and download albums with extra content (such as bonus tracks, liner notes, music videos or interactive artwork) from the iTunes Store. It was introduced in 2009 to emulate the extra material traditionally packaged with physical albums in order to make digital downloads more attractive.

But nine years after its launch, its end is nigh. According to Metro.co.uk, Apple has written an email to figures in the music industry announcing the withdrawal of LPs from iTunes. The Apple email was supposedly sent a fortnight ago from a ‘The iTunes Store’ address, signed by ‘The Apple Music Team’ and titled ‘The End of iTunes LPs’.

The email states Apple won’t accept new submissions of iTunes LPs after March 2018, with the hundreds of existing LPs disappearing from the store throughout the year. However, those who have previously purchased LPs will still be able to download its full content package using iTunes Match.

And while the news doesn’t necessarily mean Apple plans to kill off its iTunes download service altogether, it’s sparking fears of such an eventuality. After all, last year music downloads were down 23.1% from 2016, with streaming now accounting for over half of the UK’s music consumption. Apple has made decent headway with its Music streaming service, which has gained over 30 million paying subscibers in its three short years. Perhaps soon, then, this is solely where Apple's digital music ambitions will lie.

Apple Music - everything you need to know