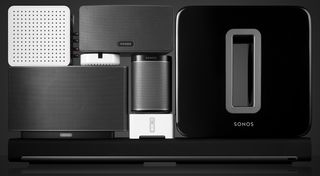 Naturally the Apple Music launch event focused on the availability of Apple Music on iOS devices, with the release date set for 30th June.

There was also confirmation of an Apple Music Android app, which is slated for an Autumn 2015 launch, some time after Apple Music goes live on iPhones, iPads, Macs and PCs.

But what of other devices? Sonos is the most popular multi-room music proposition and makes a big play of its exhaustive list of supported services, so what about Apple Music?

The @SonosSupport social media account has gone in to overdrive and from numerous tweets it seems the official line is: "[Apple Music] will not be available at launch, we'd love to bring the service to Sonos when Apple is ready."

A similar message has also been posted on the Ask Sonos forums section of the Sonos website by an official Sonos representative, who also added a note of excitement: "We won’t have the service available at launch, but we’re excited about what Apple Music promises for the future of music. We look forward to bringing the service to Sonos when Apple is ready."

There was no mention of any non-Apple device support at the launch event, Android app aside, so we'd expect Sonos to be fairly high-up the pecking order as and when Apple Music goes live on other hardware.

Sonos CEO, John MacFarlane, told the FT last month that Sonos wanted "to be the first partner [Apple] talks to" after Apple launched its streaming service. We'll have to wait and see whether that was the case...