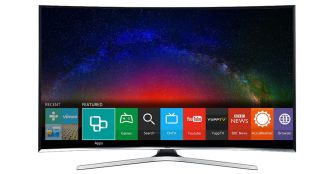 The TV category saw some noteworthy innovation this year, with the increasing emergence of 4K Ultra HD coupled with the release of (relatively) affordable OLED TV sets, plus curved and flexible screens.

As a result, we have more TV Best Buys than ever in 2015, with televisions to recommend regardless of whether you want a 40in or 50in TV, HD or 4K - or even a tech-packed 4K OLED. But let’s start small.

Panasonic’s TV division has seen a return to form this year, with a number of five-star TVs to its name. But none gets our performance-per-pound bells ringing louder than the TX-40CS520 – our cheapest Best Buy and a great-value 40in Full HD TV. Available under £400, nothing else comes close.

Despite early uncertainty, we can confirm that 4K looks great on a screen as small as 40 inches. Samsung’s midrange 4K JU7000 range has been a success, right down to the baby of the group, the UE40JU7000.

Just £880, it’s proof that the technology is more accessible than ever. Bold, well-judged colours, pin-sharp lines, and fine detail, make it a compelling choice whether you’re watching a 4K Netflix stream or a DVD. The five-star Panasonic TX-40CX680B (£700) was in the running but we’d spend the extra for the Samsung for a little extra picture subtlety.

Samsung’s picture quality has largely set the benchmark this year, and its generous smart features and the intuitive (WebOS-like) operating system Tizen, have only helped to seal its place at the top of the pile.

If you're in the market for a 47-52in TV, then look no further than our Product of the Year. Samsung took the spoils last year with a 48in Full HD screen and repeats the feat this year with the £650 UE48J6300: a (very) curved TV that delivers serious ‘wow’ factor for the money.

We start hitting serious money here but Samsung gives you every reason to spend it. The UE55JS8500 showcases Samsung’s impressive SUHD technology (essentially, its take on nano-crystal displays), and watching 4K content really does feel like you're looking through a window.

4K OLED has been one of the major breakthroughs in the TV category this year – LG kicked things off and now Panasonic is on board – and if the LG 55EG960V is anything to go by, the technology's future looks very bright indeed.

This premium TV (£3800) takes our penultimate Best Buy award for its gorgeous picture, most notably its bar-raising colour depth and contrast levels that put other sets to shame. Featuring the second iteration of LG's slick, seamless WebOS - new to this year's models - it's also a dream to use.

It’s only a brief break in proceedings for Samsung, though, with the company wrapping up the TV Awards category with its 65in, near-flagship UE65JS8500. It’s basically a bigger UE55JS8500 and delivers everything you could want from a TV: dazzling picture, an attractive curved design, weighty sound and myriad smarts. It had to see off a number of Sony competitors to get the gong, but a crisp, subtle picture and a beautifully intuitive interface make the difference.