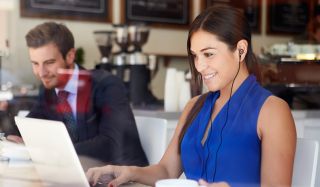 The manufacturer has teamed up with Asius to integrate RealLoud technology into these new in-ears, which have proved a hit with the crowdfunding community – passing the funding target with 29 days to go.

RealLoud is said to be the only patented audio technology that "delivers a louder, more spacious and richer sound, while minimising the risk of hearing loss" and has been developed by Stephen D. Ambrose.

It works by providing a "secondary eardrum" to absorb "harmful pneumatic pressures" that can be produced by in-ear headphones. This eardrum is called the Ambrose Diaphonic Ear Lens (ADEL).

The ADEL Ambient earphones are the first of four variants, which come in four models themselves – the Ambient 2, with two drivers; Ambient 4 with four drivers; Ambient 8, with more bass response; and Ambient 12.

Secondly are ADEL Control buds that are based on a modular design, letting you adjust ambience level, in-ear impedance and bass response. You can also use them as ear protection in "loud environments".

Meanwhile, the third in the range is the U-Series – a universal-fit version of 1964Ears V-line of in-ears and will be available in four variants. These are the 4, 5, 6 and 8; each of which represent the number of drivers.

And fourth is the A-Series Custom In-Ear Monitors, which are designed for professional musicians and "the most discerning listener". The A-Series feature noise cancelling and come in two models – the A10 and A12.