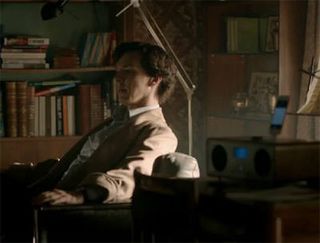 From the big screen last week to the small screen this week, it's now TV's turn to shine as we take a look at some of the hi-fi and home cinema cameos that have diverted our attention in the middle of our favourite programmes. That's why we don't know who shot JR.

From American drama serials to cult British sitcoms, it seems as if some producers are determined to make sure characters get to enjoy the finest AV kit, from new products to retro classics.

We've even seen rumours that Coronation Street's Stan and Hilda Ogden had an LP12 and Celestion SL600 speakers. But we couldn't confirm that, unfortunately.

We've probably missed plenty out, so don't forget to let us know your favourite spots in the comments section below...

MORE: 15 of the best AV cameos on the big screen

When you have the job of keeping the people of Oxford on the straight and narrow, it's crucial to use your leisure time wisely. Inspector Morse did that with his Roksan Xerxes turntable and, so the legend goes, a Naim amplifier in tow.

From West Philadelphia born and raised, the Fresh Prince's life story is probably one of the most quoted. But we think he'd be a bit too cool for school to be caught playing with a NES these days. Carlton, on the other hand, probably not...

MORE: PlayStation 4 vs. Xbox One comparison

In updating Sir Arthur Conan Doyle's works for the 21st century, Sherlock Holmes loses the deerstalker and adopts a McIntosh, though not the jacket kind. Here's what we think is an MT-10, MR 88 and MCD1100 – elementary kit, dear Watson.

Don't panic – we're not going to let the Americans steal a march on us. Back in Blighty with our own Holmes, the sleuth is just as discerning about his audio equipment. And what is his kit of choice? It's the Ruark R2i dock system...

Just because you're a senior MI5 figure, it doesn't mean your own side won't mistakenly arrest you. But if you're Sir Harry Pearce, just put the Bang & Olufsen CD player on and wait until you're asked to come quietly. You know you're right, after all...

At some point, most of the Friends found themselves out of work. But that doesn't mean compromising on their hi-fi equipment. Case in point? Joey and Chandler's apartment has a fairly serious pair of Martin Logan speakers.

Across the hall, meanwhile, Monica and Rachel's home is the setting for another great cameo. No, we're not talking about Brad Pitt (left) – we're actually eyeing up the Bang & Olufsen CD player over there in the corner of the room (you might have to squint).

Back this side of the pond, Coupling was labelled as the UK's answer to Friends. That means making sure characters had the kit to match, with Steve opting for what appears to be a TEAC Reference micro system.

Frank Underwood is annoyed. He's been overlooked for a senior government role and is now out to exact revenge on those who betrayed him. But he's gotta let his hair down and Killzone 3 on his PS3 seems like a rather poetic choice...

10. Only Fools and Horses

We make no apologies for the poor picture quality, but we just had to squeeze in what we think is THE best Trigger quote from Only Fools And Horses. We can't tell you what the system is, but the track is Mozart's Concerto No.38 in D-Major. The karaoke version.

You've made more money than you'd ever imagined possible, albeit ill-gotten gains. So what do you do? Well, Jesse Pinkman might just have had the right idea – straight off to buy what can only be described as a "b*tchin'" stereo set-up.

Alan Partridge: "I'd have to say The Best of the Beatles."

We can't help thinking that some B&O kit might just be a little wasted on Alan...

Whether Columbo is the definitive TV sleuth may be up for debate, but it was certainly never short of AV cameos. There were so many to pick from, but we've gone with the Marantz C-104 portable cassette recorder. Just one more thing...

Here's a delicious combination of two British exports combining in a great TV scene as House, M.D. (Hugh Laurie) fires up The Who's Baba O'Riley in a moment of indulgence. With admirable support from an iPod and what looks like a Bose SoundDock.

House also owns Dueval speakers and a Sota turntable, as seen in other episodes.

We've seen law enforcers and medical professionals showing off their turntables, and it seems TV lawyers share that love of vinyl. Only the best will do for Suits' Harvey Procter – a Pro-Ject 3 Genie. And you'll hear no objections from us, m'lud.

David Brent's opinion of himself isn't matched by others. We overlooked Tim's Hat FM for this flawed dabble in the world of motivational speaking – complete with portable audio player (JVC?). Simply The Best? Maybe a few years ago David...