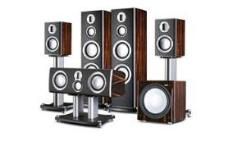 One of the finest 5.1 speaker packages on the market; delivers everything you could wish for – and more

You'll already know about the high regard we have for Monitor Audio's Platinum-series.

So, put different Platinum speakers together, and you ought to have something special. Just how special, though, has come as something of a surprise to us.

The PL300 AV is a fabulous surround system – one of the best we've ever tried.

It plays everything superbly, from live concert Blu-rays to madcap action movies, revealing every last gasp of subtle effects and powering through sofa-shaking dynamics with a deftly judged blend of sublime detail and thrilling drive.

And, of course, it's also sensational in stereo. In fact, after several weeks enjoying its company, we're no closer to exposing any major weaknesses.

It's substantial, its drive-unit complement matching that fitted to the huge PL300s, which ensures the front three speakers integrate superbly. The optional floorstand, shown here, is a worthy investment at £300.

Bass in your space
Rounding things off is the formidable PLW-15 active subwoofer, which uses a rigid 15in long-throw metal drive unit in a sealed, superlatively constructed 50kg enclosure finished to the same lavish standard as the other speakers.

Fed by an incredibly fast 1000W Class D power amp, capable of reaching down to an ultra-low 16Hz and blessed with extensive tweakability, it's every bit as articulate and potent as it ought to be.

First, remember that a system this capable needs space – but if you can afford the package, that shouldn't be an issue.

You'll also need good partnering kit – amps, a Blu-ray player and the like – because while the Monitors aren't that demanding to drive or fussy about tonal matching, they're just so damn good that to listen to them using anything second-rate would be a crime.