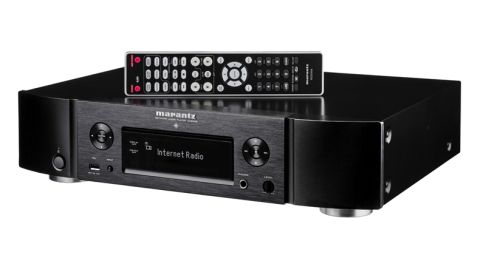 A well-furnished, solid-sounding budget streamer that simply needs some caffeine

If your firstborn grows up to be a professional sportsman and the second is hailed the next Bob Dylan, you’d reasonably expect the third in the brood to be an overachiever too.

From the same gene pool as the Award-winning Marantz CD6005 CD player and PM6005 stereo amplifier, the NA6005 streamer has pretty high standards to maintain if it's going to give the brand’s 6000 Series Bronte sisters-style acclaim.

It sits beneath the company’s midrange NA8005 and flagship NA-11S1 streamers but, skimming down its spec sheet, you wouldn’t necessarily get the impression that it has only entry-level status.

A network connection gives you access to internet radio, Spotify Connect and music on your network, whether it’s stored on your laptop or a NAS drive, is an MP3, WAV or DSD file – the Marantz’s CS4398 DAC is capable of handling WAV and FLAC up to 24-bit/192kHz and 2.8/5.6MHz DSDs.

You can go down the wireless route instead by attaching the supplied wi-fi antennae at the rear. There’s another for Bluetooth, and built-in Airplay provides another offline streaming option.

As far as physical connections go, there’s a USB input (for both playback and charging), optical inputs and outputs alongside a 6.3mm headphone jack and a single-ended analogue to connect to your amplifier.

It's a solid, stout bit of casework, available in black or silver and featuring pretty much what we expect from budget Marantz machinery: legible white-on-black text display, straight-up directional buttons and the brand badge.

Streaming may be a relatively modern phenomenon, but Marantz isn’t going to mess with its traditional aesthetics.

Having a dial to scroll through libraries would be more intuitive than pressing buttons, and looking at it next to the modern Pioneer N-50A (£500) we’d also prefer a splash of colour and album artwork on the screen.

But the unit is more than adequately functional and attractive, and considering its humble asking price, that does seem a little like wanting a heated steering wheel and ventilated seats in an entry-level Ford.

While handheld remotes are almost always preferential to on-unit control, rarely are they favoured over an app, the nucleus of the streaming experience. But sadly, that’s not the case here. The Marantz Hi-Fi Remote app (available free on iOS and Android) is pretty poor.

Although it offers up an easier control method to browse music libraries, gives you the opportunity to build playlists, and control any connected Marantz CD player and/or amplifier in one place, it’s frustratingly flaky.

When it works, it’s fine. But all too often, using it is like visiting your nan, where you spend much of your time having to repeat yourself over and over again.

After a few minutes of inactivity, the app sometimes forgets where it is and what’s playing, taking you back to your NAS drive’s root folder instead. It didn’t take long for us to revert to the physical remote, although we did find the iOS version on our Apple iPad Air 2 slightly more reliable than the Android version on our LG G4.

The NA6005’s character offers all you might want from a glass of red wine on a bitterly cold evening: smoothness, body and warmth.

With tonal balance kept in check, it’s easy to snuggle down to Olafur Arnalds’s Eria’s Waltz; violins and pianos are comfortingly full-bodied, clear and fleshed out, and the notes are able to move freely in a dynamic space that, while not especially nuanced, captures the composition’s principal peaks and troughs.

It puts its foot into lofty guitar riffs and sprawling synths, and ensures any vocal is explicit and focused.

Amid its standout midrange is a knack for rendering instrumental textures; the fiddles and pipes defining Kate Bush’s Jig of Life are tangible, while her enigmatic, uncharacteristically deep vocal is projected with a confident solidity, and enough expression to keep you interested in her narrative.

You get the impression the Marantz can never really get into top gear, though, opting for easy listening, Sunday morning smoothness over outright snappiness and attack. In SBRTKT’s Wildfire, drum slaps lack thwack and the jagged bass synths that freewheel over the top feel like they need a kick up the backside.

Even the zingy pitch-shifted keys that pinch at the soundscope now and again yearn for more dynamism, sounding a tad weary.

You’ll have to throw a bigger sum of money the way of the Pioneer N-50A (£500) or Bluesound Node 2 (£430) to make a live recording of Led Zeppelin’s Kashmir (24-bit/48kHz) sound open and lucid enough to be deemed pleasing, too.

Even if the Marantz NA6005, with its operational app-based upsets, sometimes tests our patience more than our analytical ears, it proves itself a decent and solid – if a little safe – sounding introduction into streaming for anyone on a budget looking to finally embrace digital and introduce network features into their system.

Although it's one star behind its amp and CD siblings, the NA6005 turns out to be the Anne Bronte of the entry-level Marantz series.