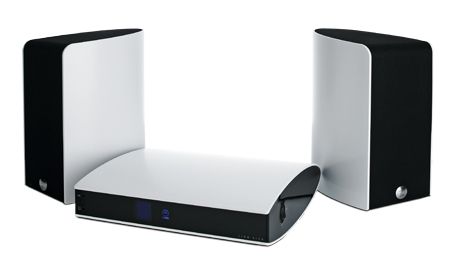 Best music system £1500+, Awards 2013. Sleek, stylish and fun to use, Kiko also has the performance to impress

The booming popularity of music streaming must have the people at Linn sitting back and muttering ‘told you so’: the Scottish company has been making streaming servers and players for ages, runs its own record label offering high-resolution Studio Master downloads, and almost three years ago canned its range of CD players in favour of streaming hardware.

Now, with its DS player range challenged at every turn by rivals old and new, Linn’s made a pursuer-foiling swerve with the launch of its Kiko system: it doesn’t look like anything else on the market, doesn’t work like any other manufacturer’s streaming system, and maybe isn’t even aimed at the same kind of audio enthusiasts Linn tackles with its mainstream products.

So what is Kiko? In simple terms, it’s an all-in-one system, sold complete with active speakers – there’s a digital crossover and two amps per channel inside the main control unit – and designed to make streaming simple.

Its basic role is to stream music via ethernet – there’s no wireless connectivity – from a computer or NAS drive, but the system also has a couple of analogue inputs, a couple of digital, and a trio of HDMI ins and a monitor output, with video passthrough. So you can run your video sound through it, too.

And Linn is unashamedly going for the ‘lifestyle’ market with Kiko: the publicity material is all very ‘designer living’, and along with the curvaceous styling, the system comes in a choice of six colours.

You can have the white of the review sample, black, silver, ‘champagne’, or light or dark blue, with finishes being to a very high standard on the metal casework of both the main unit – officially designated Kiko DSM – and the Aktiv Kiko speakers.

There’s only one control on the Kiko DSM, and that’s a power switch on the right end-panel… or the top-panel, should you choose to use the unit standing vertically rather than horizontally.

Should you choose to do that, the Kiko DSM’s display also reorients iself, which is a neat design touch.

Mind you, there’s not much to that display beyond a start-up logo, source indication and a volume control, as most of the ‘driving’ of the system is done using Linn software (of which more in a moment).

As with all its products, Linn recommends you have Kiko installed by the supplying retailer, but to see how easy it was to set up – and not just to be awkward – we insisted on doing it ourselves.

The computer-run ‘wizard’ provided on the Linn website works with features built into the unit to make this a breeze: the speakers connect using cables terminated with foolproof Neutrik Speakon plugs, and the system will then play a programme of music to allow you to check you have them ‘the right way round’.

After that the user is walked through every stage of installation, from how to plug in the speakers...

..to setting Kiko to your desired source using the remote supplied

... and finally connecting to the network

Then you can leave the operation to one of Linn’s software apps – either Kinsky for full control or the simpler Songcast.

And once you’re networked, a sample of music lets you check all is streaming as it should.

Linn Kiko: How it works

In use, Kiko is rather different from appearently obvious rivals such as the Naim Uniti range and the Cyrus Streamline.

Those rivals are designed to ‘pull’ music from a computer or NAS drive; the Linn is a system to which music is ‘pushed’, either using Linn’s Kinsky software running on a computer, phone or tablet, or the simpler Songcast application to turn the system into your audio output device for whatever hardware it’s running on.

Find out more about the Linn Kiko in our dedicated blog

So, with Kinsky on an Android or iOS tablet, say, you can choose music on your computer or NAS, and set-up playlists for Kiko to deliver. Or should you have music stored on an iPad, for example, you can stream it wirelessly using your home network to Kiko.

Getting used to using Kiko and its attendant software takes a little familiarisation – the term ‘thinking Scottish’ was mentioned a couple of times – but the sound requires much less acclimatisation: in typical Linn style, it’s agile and well-detailed without ever trying too hard to show you how hi-fi it is.

That’s emphatically A Good Thing: Linn has always majored on delivering the most involving musical experience, and whether it’s playing a hi-res classical work from Linn’s own label, thundering out some electronica from the recent Bleep Guide to Electronic Music or streaming internet radio services – yes, it does those, too, with set-up via the TuneIn platform – the sound is big, confident and easy to listen to while at the same time drawing you into the music.

It’s even a riot when playing video or digital TV sound through the HDMIs. Provided your network is up to snuff – and this is something the installing Linn retailer will be able to sort for you – operation either straight from your computer, or from phone or tablet, will become instinctive, and should you get really hooked the software can

play to multiple Kikos – so you could have one in every room of the mansion.

Yes, Kiko would be challenged hard on pure sound per pound by more conventional rivals – think Naim UnitiQute and Neat Iotas, for example – but the style, quality of build and well thought-through ergonomics give the Linn an appeal all of its own.

For its target market, or as a second-room system for existing Linn DS owners, we reckon it’s bang on the money.